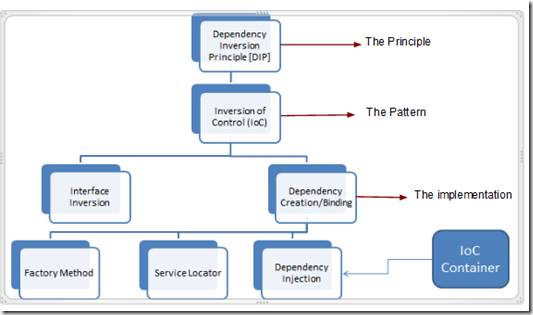 Example :- The computer is a high level device/module. It has an USB port – the interface exposed – to which all other (low level modules) devices e.g iPhone, mouse, Keyboard can plug into. The computer can make use of any device as long as that device can connect to the USB port.

So here, the consumer (ATest) needs to know about each provider (BTest1, BTest2 and BTest3). The “control” here is in providers’ (B classes) hand because they are defining interfaces (public methods) which the consumer needs to call and need to be changed If the public method changes.

What should really happen – We create an interface IBTest having one method DoBWork() which would be implemented by all the B classes with their own concrete implementation. Here we inverted the control. The control is in consumer’s (Class A) hands now.

Now we end up having something like below in Class ATest.

Now with above, we are still instantiating a concrete class (B1Test) and this makes the ATest (Consumer) dependent on class B1Test (Provider).

Dependency Creation/Binding Inversion patterns
These patterns let creation of dependencies to be done by another class. Following are the ways to do it.

This entry was posted on September 10, 2012, 4:44 am and is filed under Design Patterns. You can follow any responses to this entry through RSS 2.0. You can leave a response, or trackback from your own site.

The World as I see it

A tragic's view from the cricket hinterlands